My journey into pre-hospital care began when I joined the Luxembourg Fire & Rescue Service as a junior cadet at the age of 8. When I was 15, I was going out on live rescue missions, and there was a local law that allowed me to leave school to attend emergencies – it was amazing! One night as we were cutting a young girl out of a car wreck, the local trauma team (Luxembourg SAMU) arrived and delivered critical care on the roadside, putting the girl into a coma and ultimately saving her life. From that moment, I knew pre-hospital care was me – it combines the unpredictability, teamwork, and need for a calm head that I learned from fire & rescue, with the science and biology of medicine, all coming together to save a human life.

Following my experience in the fire and rescue service, I became a member of the British Army Royal Army Medical Corps as a Territorial Army Medical Officer at University. After training in Emergency Medicine, Anaesthesia and Intensive Care, I undertook a period of full-time pre-hospital research in cardiac arrest and resuscitation. This ultimately led to the first Scottish national out-of-hospital cardiac arrest strategy, something I’m really proud of. I worked with London’s Air Ambulance and Air Ambulance Kent Surrey & Sussex (AAKSS) before acting as a London 2012 Olympic Stadium doctor. I am now Associate Medical Director of AAKSS and fly regularly. I volunteer as a doctor on the UK International Search & Rescue Team and deployed to Nepal after the major earthquake. I was privileged to be made an MBE by Her Majesty the Queen for services to pre-hospital emergency healthcare. I sit on the UK Resuscitation Council, contributing to international pre-hospital guidelines.

I am very privileged to work on one of the world’s leading air ambulances. We fly 24 hours a day on over 2,500 missions per year. No shift is the same, and we attend to the most seriously unwell and severely injured patients. We can deliver excellent care on the roadside; this includes pre-hospital anesthesia, transfusing blood products, and sometimes performing emergency surgery on-scene. Working under pressure in critical situations requires exceptional teamwork, and I enjoy working as part of a high-performing pre-hospital team. For me, nothing in the world is as rewarding as when a patient and their family, particularly the ones you thought may not survive, come back to the helicopter base to visit us. It’s a truly humbling and rewarding experience, and I wouldn’t do anything else.

When out of uniform, I enjoy fitness, particularly using the gym, running, and cycling – in my job, it’s essential to be both physically and mentally fit. I also spend as much time as I can with my wife and two young children.

I joined Prometheus in 2012, initially supporting Research & Development. I was impressed with the company’s energy, passion, clinical excellence ethos, and desire to develop the best possible life-saving equipment. It’s a satisfying feeling now using several products in my clinical role that Prometheus Medical developed. Seeing these devices being used in the field to save lives is really rewarding. I was then Chief Medical Officer for Prometheus Medical in the Middle East and the UK, helping to establish the current pre-hospital consultancy program. We have also developed some unique training courses, helping to ensure pre-hospital clinicians are trained to the very highest standards.

Working under Safeguard has been exciting as we now operate on a truly global level. I was honored to be invited to take up the Safeguard Chief Medical Officer role, and we have recently launched the Safeguard Clinical Advisory Group. This team of inspiring global leaders in pre-hospital care will now come together to develop Safeguard’s equipment further, training and consultancy programs across the globe, all of which will save many lives. It’s an exciting and rewarding journey to be on! 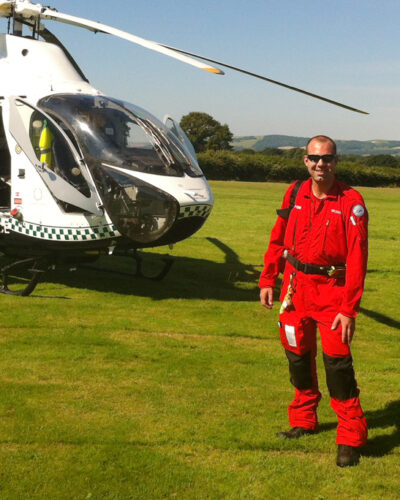 For me, nothing in the world is as rewarding as when a patient and their family, particularly the ones you thought may not survive, come back to the helicopter base to visit us. It’s a truly humbling and rewarding experience, and I wouldn’t do anything else