I joined the Army in 2009 as a Combat Medic Specialist. I served on Active Duty until May of 2019 and continue to serve in the Army Reserve. I have 12 years of military medical experience in tactical, surgical, clinical, and field/training environments. Additionally, I have attended some of the best military medical training courses and instructed several military and civilian medical courses.

One of my most challenging roles, and the one that made me realize my desire to expand my influence on military medicine, was being part of the team that stood up the 1st SFAB (Security Force Assistance Brigade) at Fort Benning, GA. Being exposed to the issues faced when trying to organize, form, and operationalize an organization that had only been thought of at that time, allowed me insight into many of our struggles: military medicine is full of talent and passion but lacks the proper support.

I love my role’s ability to interact with the end-user and better understand the Department of Defense and medical industry relationship. Understanding the current issues that military medics face and being involved in expanding their future support and success is personally rewarding. In addition, it allows me to further develop my influence in correcting issues and advancing tactical medicine, which is my passion. To relax, I enjoy fishing, golf, hiking, and generally spending time outdoors.

I was initially attracted to Combat Medical by their motto: ‘to simplify tactical medicine’ and was first introduced to their line of products in 2018 while deployed to Helmand Province, Afghanistan. I received an aid bag from our medical supply office, it was outfitted with the MARCH Medical Gear System (now the Color-Coded Trauma Treatment System) – I had never been exposed to many of the devices included! The color-coding element was a novel idea in tactical medicine at the time (I’d only seen something similar in the Broselow Pediatric Resuscitation System). As I began training with and researching the company and its devices, I realized that they truly lived out their motto. Almost every device that I trained with had me asking the same questions. Where has this been my entire career, and why have I never heard of this before?! I interviewed with the company upon my return from Afghanistan. I found that they genuinely had a passion for advancing tactical/pre-hospital medicine by finding, creating, and fielding devices that could indeed increase the overall success of the medic/corpsman and layman first responders on the battlefield. I accepted this job because of the opportunity to work with professionals who share my passion for advancing tactical medicine. At the risk of sounding cliché, I don’t like our products because I work for the company, I work for Safeguard Medical because I truly believe in OUR products. 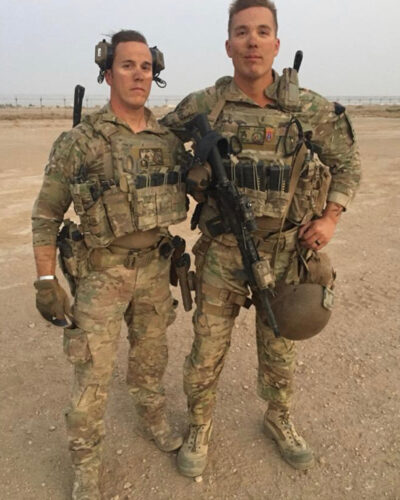 At the risk of sounding cliché, I don’t like our products because I work for the company, I work for Safeguard Medical because I truly believe in OUR products