I started my medical career as a combat medic in the IDF 97th infantry battalion in 1999. After my release from the Army, I started working as an EMT Basic for Israeli national EMS and signed into the paramedic bachelor’s degree program at Beer Sheva University. After three years, I became a paramedic and continued my EMS duties. First mission overseas was a training project in Panama where we were asked to build an EMS system for Panama City, including paramedic training, dispatch, and ongoing supervision.

In 2011 I achieved my master’s degree in Emergency Preparedness and Disaster Response, then enrolled on a civilian flight paramedic program and began work for Air Med Israel, a medevac company that evacuates patients to and from overseas, using a fixed-wing aircraft. In 2014, the ICRC asked me to deploy as a health delegate to Ukraine during the Crimea crisis. This two-month mission was the training of emergency response medical teams and a first aid trainer course. Like all the medics in Israel, I am frequently called in for reserve military service. During peace times, I train tactical casualty care, and during an emergency, I am deployed with the IDF field hospital. During my reserve service, I have been deployed twice – to the Nepal earthquake and Equatorial Guinea ammo explosion response.

When off-duty, I enjoy running outdoors, and during the sunny season, I enjoy hiking in Israel with my family – cooking is my favorite relaxation method!

All of my days look different. I meet and enjoy interacting with paramedics, military, hospital, and fire teams while communicating in several languages. One of my favorite things is traveling to places with different cultures and habits and seeing how the language of emergency medicine connects everyone.

Safeguard Medical is a place that touches the hearts and minds of people on the frontline, and I relate to them. I love that Safeguard can deliver high-quality medical solutions that save lives, and I’m proud to be a part of this effort. 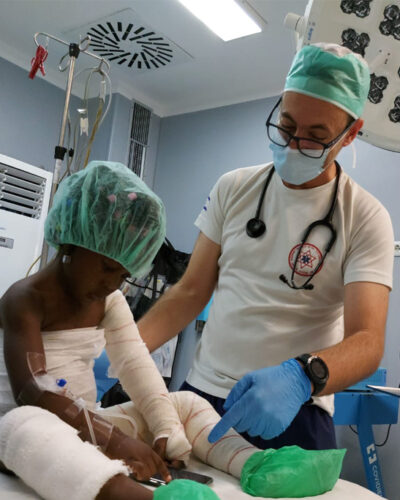