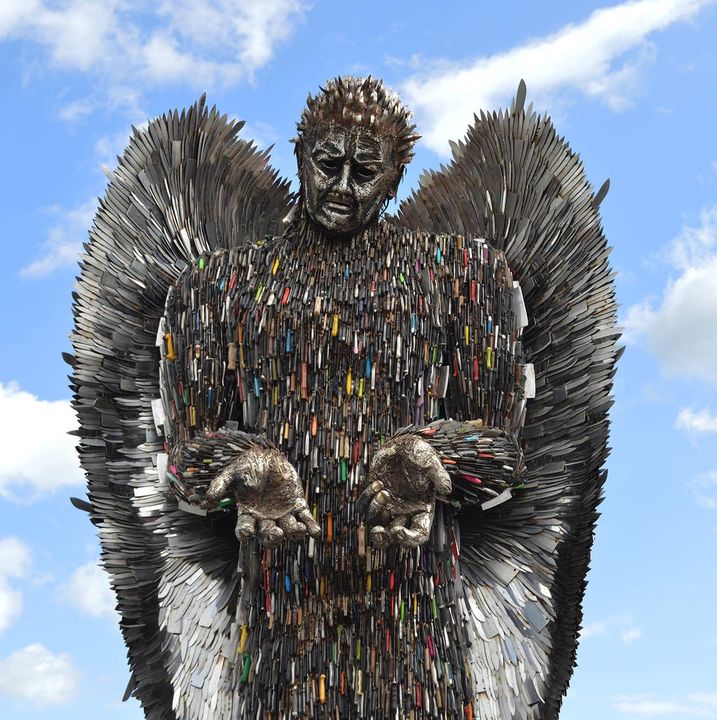 This summer Safeguard Medical is sponsoring the Knife Angel’s tour stop in Hereford. The Knife Angel, also known as The National Monument against Violence and Aggression, is a contemporary sculpture formed from 100,000 confiscated knives that were received from 43 Police Forces and anonymously donated from 200 knife banks across the UK – many of them arriving in evidence tubes and with bodily fluids still on their surface. The stunning sculpture was created to highlight knife crime in the United Kingdom and educate young people of the harmful effect violent behavior can have on their communities.

Standing 8.2 m (27 feet) tall and weighing 3.5 tons – the Knife Angel was created by artist Alfie Bradley and the British Ironwork Centre, based in Oswestry, England, and was completed in 2018. Once the thousands of knives were delivered to the British Ironwork Centre, each one was disinfected and then blunted. Then, the knives were welded onto a frame made of steel sheeting. In addition, knives were welded onto steel plates to create the wings of an angel, giving them a feather-like appearance. Families who had lost loved ones as a result of knife crimes were invited to have a personal message engraved onto one of the knife blades used to create sculpture’s wings. To date, over 80 families have contacted the British Ironwork Centre to have their messages included in the sculpture – and requests still continue to come in. These messages of love and remembrance on the Knife Angel’s wings are not only from families, but also perpetrators who have seen the error of their ways and now fight knife crime and violence in hopes to stop it from happening on our streets.

The Knife Angel has been on a tour of towns and cities throughout Britain – and will be hosted at the Hereford Cathedral from Monday, June 14 through Monday, July 12, 2021. During the Knife Angel’s Hereford visit, there will be an opening ceremony, closing vigil and free public workshops and events.

Ami Owen, a member of the Safeguard Medical sales team in Hereford, will be presenting several free workshops focused on emergency bleed control, showing how to apply tourniquets, chest seals and emergency bandages that the emergency services use to save lives by stopping the bleed. Register for one of our free interactive workshops through https://www.linkedin.com/company/safeguard-medical/events/.

We are proud to be a sponsor of this educational and inspirational event on the Hereford stop of its tour around Britain to raise awareness of the issues of knife crimes, violence and aggression.